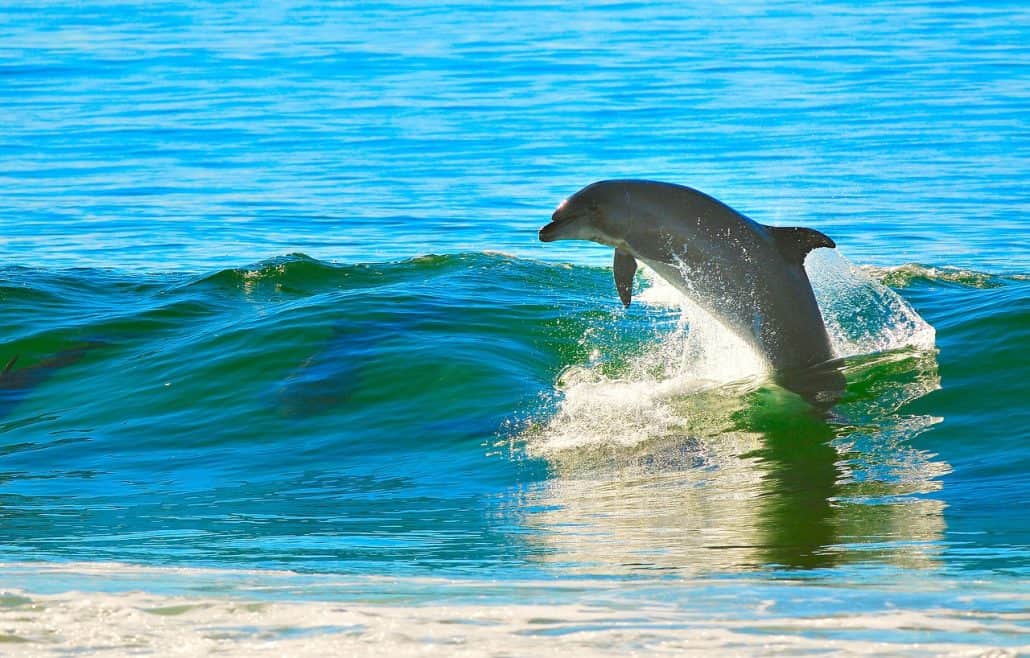 Enjoy the cool breeze from the Atlantic Ocean as we cruise around the beautiful waters of the Matanzas Bay and Intracoastal Waterway for your own waterfront perspective of many of the most popular highlights, including the St. Augustine Lighthouse, Castillo de San Marco National Monument, the Bridge of Lions, Flagler College, and more. We also focus on dolphin, wildlife and nature viewing – Natural Florida is all around St. Augustine and just a boat ride away. This trip lasts approx. 1 hour. Departs from the Conch House Marina on Anastasia Island, just a short distance from historic downtown across the Bridge of Lions. 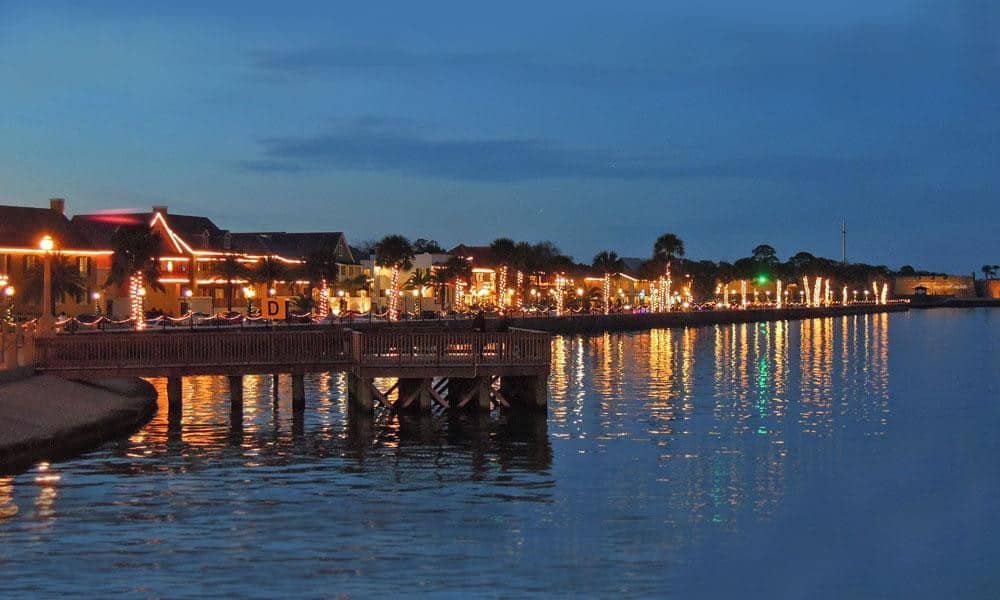 This evening boat tours from Nov 20 through Jan 31, celebrates the beauty and festivity of the Nights of Lights. St. Augustine in the evening is already a beautiful scene, but the city puts on a glowing show for the holidays, dressing up downtown with thousands of white lights that look stunning from a waterfront view. This tour cruises the waterfront to enjoy the light show, while also taking in the landmarks that make the city so very special. You can have some fun viewing the lights with our special 3D glasses.

Nights can be on the cool-side, so make sure to dress appropriately for the weather. This trip lasts approximately 1 hour. Tour departs from the Conch House Marina on Anastasia Island, just a short distance from historic downtown across the Bridge of Lions.

Shrine Our Lady of La Leche 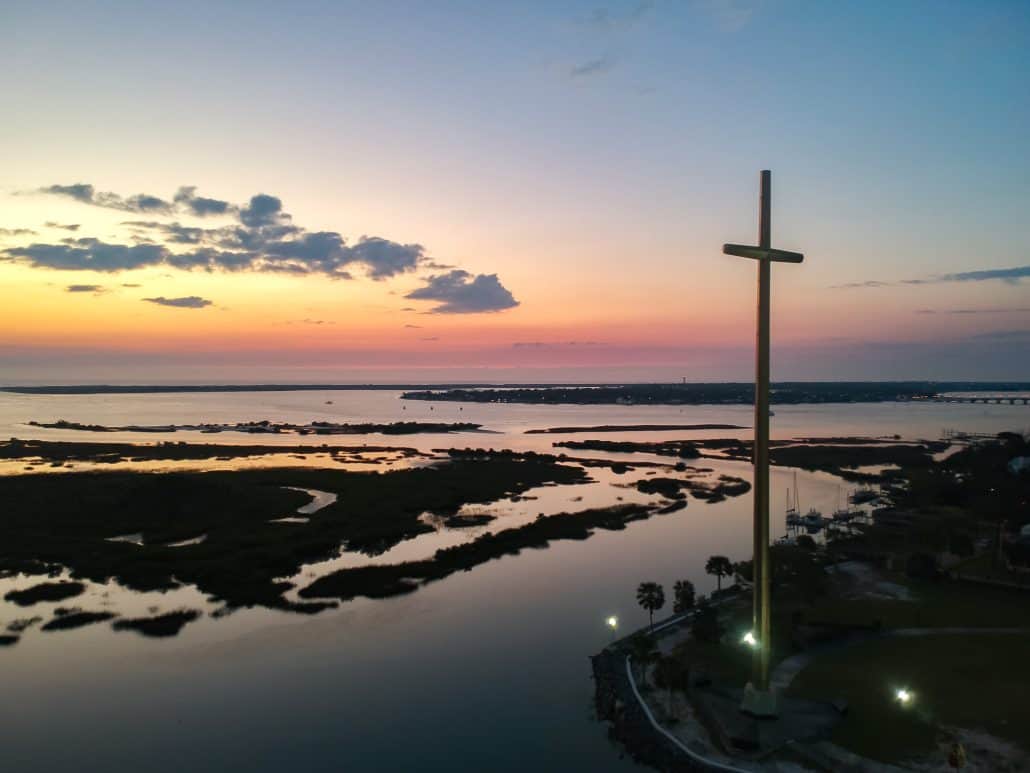 On September 8, 1565, five ships sailed into a small cove on the coastline of what was known to the Spanish as La Florida. Under the command of General Pedro Menendez de Aviles, they came to the New World from Spain sent by King Philip II. They arrived in hopes of establishing a colony, securing the land for Spain, and most importantly, to convert the native American Indians to Christianity. Father Francisco Lopez de Mendoza Grajales, recorded the days events in his diary:

On Saturday the eighth the General landed with many banners spread, to the sounds of trumpets and the salutes of artillery. As I had gone ashore the evening before, I took a cross and went to meet him, singing the hymn Te Deum Laudamus. The General, followed by all who accompanied him, marched up to the cross, knelt and kissed it. A large number of Indians watched these proceedings and imitated all that they saw done.

Following Menendezz veneration of the Cross, thus proclaiming this land in the name of God (Nombre de Dios) Father Lopez celebrated Mass at a rustic altar made of wood. The sky served as the roof for what was the first parish Mass in what is now the United States. It was on this sacred ground that the Spanish settlers would begin devotion to Our Lady of La Leche, Nuestra Senora de La Leche y Buen Parto, Mary nursing the infant Jesus. In the early 1600s, the Spanish settlers of St. Augustine established the first Shrine to the Blessed Virgin Mary in the United States.

Today, more than 450 years later, an image of Our Lady of La Leche – Our Lady of the Milk and Happy Delivery – graces a small mission chapel in the heart of what is lovingly referred to as the sacred acre. Pilgrims come from all parts of the world to pray for her powerful intercession. They pray for fertility, for the health of their children, for safe delivery of those expecting. Their prayers continue to be answered, and many return in thanksgiving to share with us their stories. We invite you to come join us – to stand on holy and sacred ground where our story of the conversion of hearts and the graces of Mary continues. 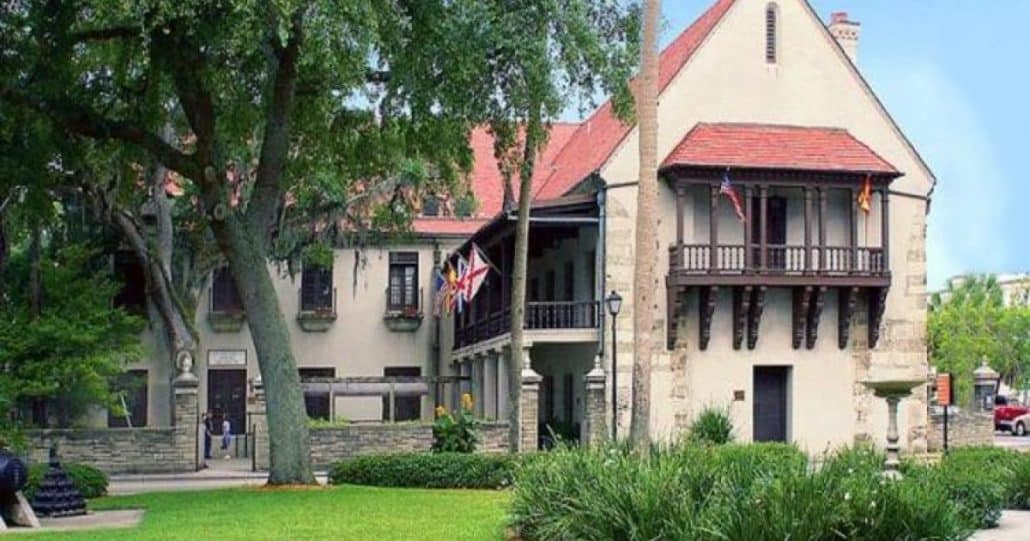 Governors House Cultural Center and Museum is located in the heart of historic downtown St. Augustine at the intersection of King Street and St. George Street overlooking the historic Plaza de la Constitucion. The building, historically known as Government House, has a long and fascinating history since the site has been home to several government offices since 1598. An exhibit in the grand lobby follows this history including a timeline to present-day. 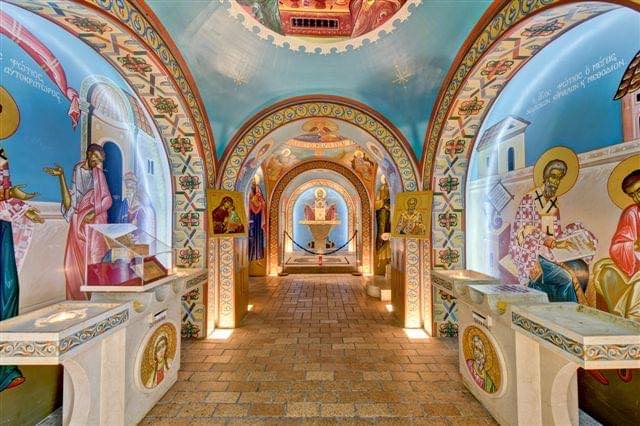 Come and visit our magnificent Orthodox Chapel filled with Byzantine style frescoes and take a tour of our historic museum. Special exhibits tell the story of the First Greek Colony in the New World. This freestanding exhibit contains various artifacts, photographs and historical documents. 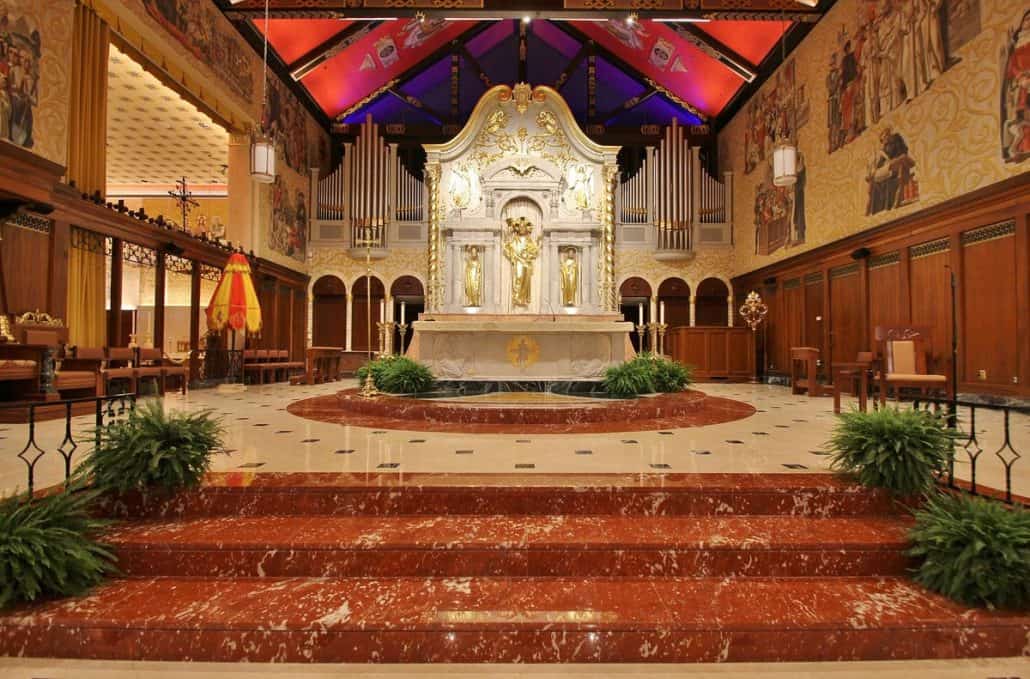 This is the oldest Catholic Church in the city and is the seat of the Bishop of the Diocese of St. Augustine. The church and structure has unique Spanish architecture with ornate details both inside and out. The property is free to tour and is worth a visit. 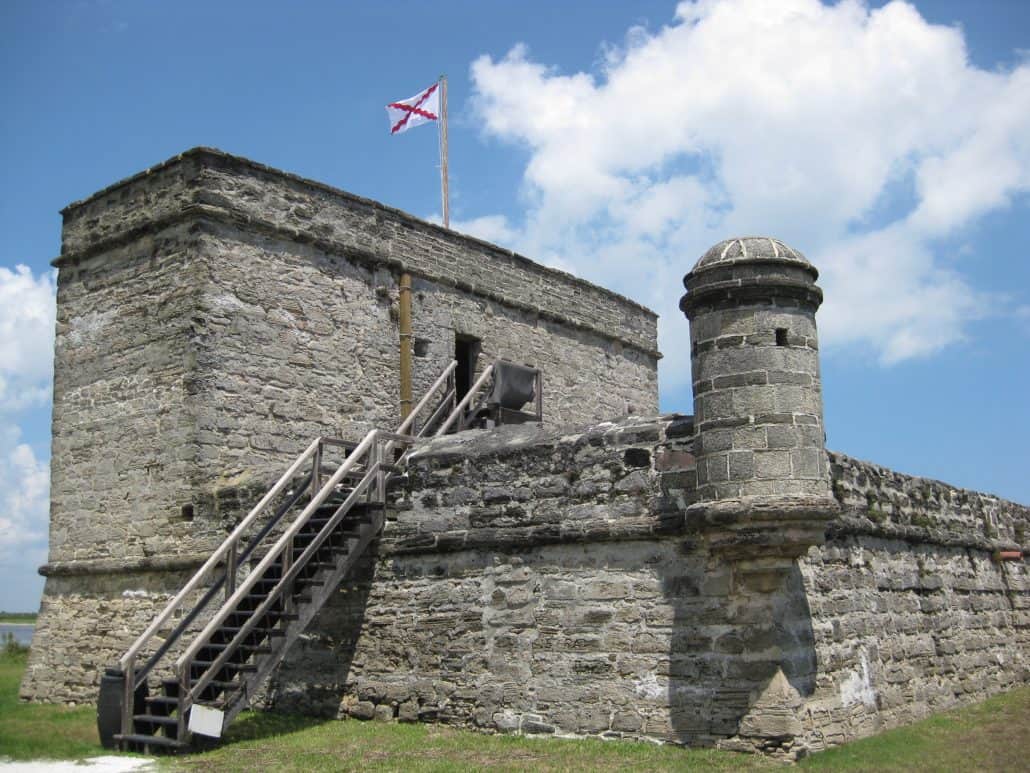 Throughout its history, the stories of Fort Matanzas and the Matanzas area have been closely intertwined with that of the city of St. Augustine.

Located fifteen miles north of Fort Matanzas, St. Augustine and the Castillo de San Marcos serve as outstanding reminders of the might of the early Spanish empire and as reflections of European conflicts as countries battled for land and power in the New World.

To read all about the history of the fort, visit their website

The park is free to visit including the ferry to the fort. To get tickets and more information on operating hours, visit their website. 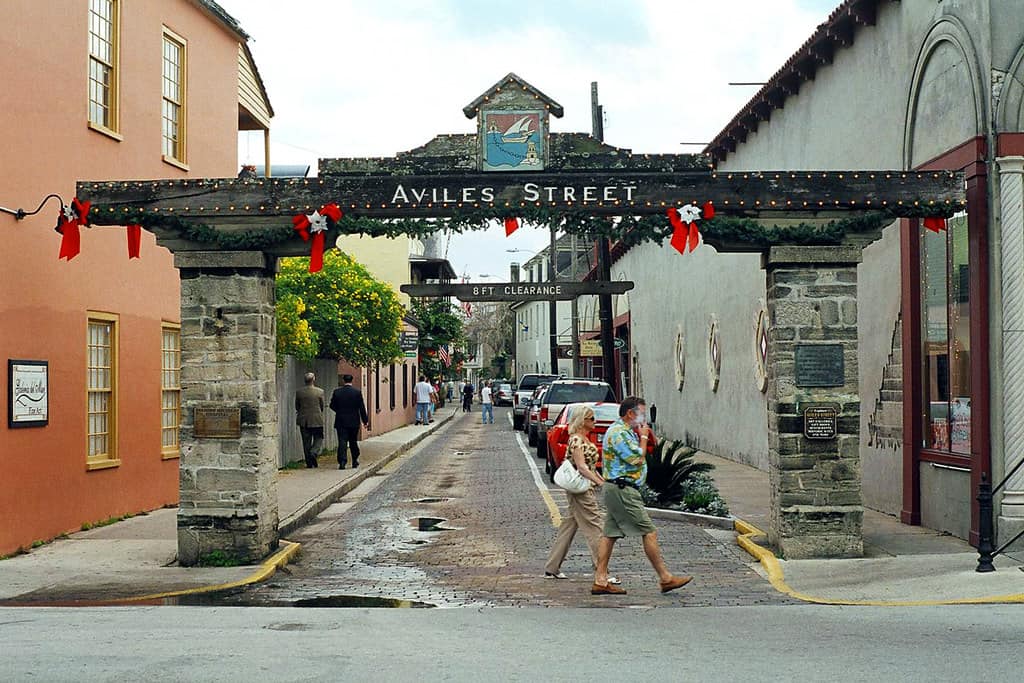 Aviles Street is the oldest street in the nation as we know it with relics and pottery shards unearthed dating back to the 1600s. Also known as the artists district and still houses a vibrant art scene. 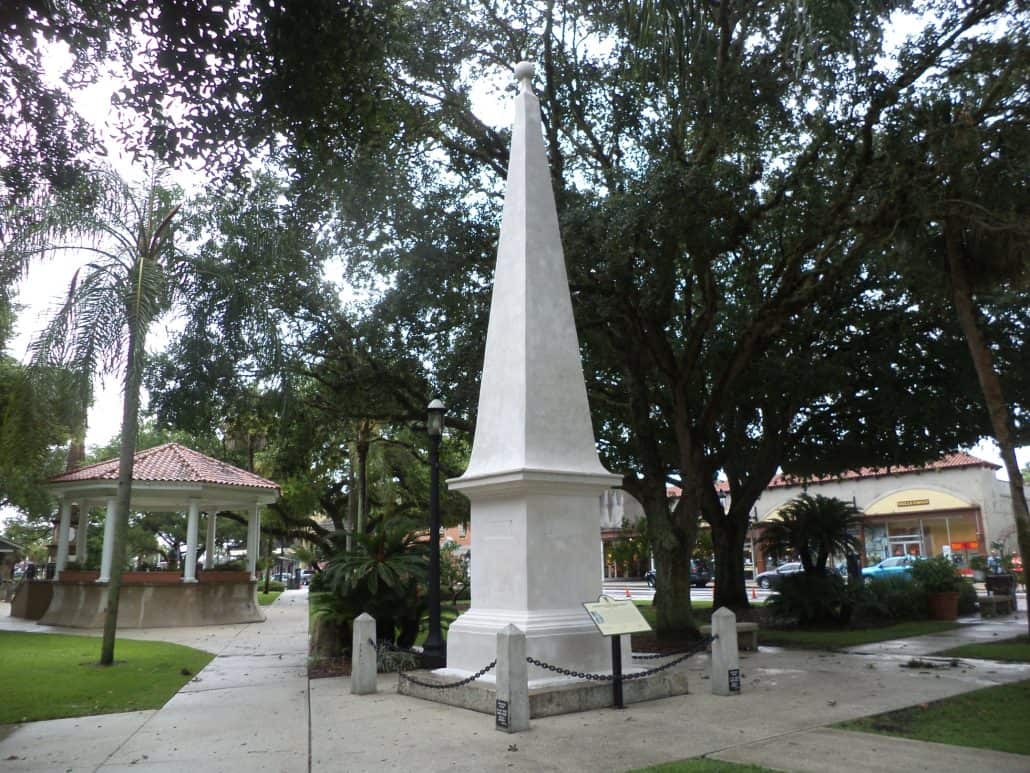 The Plaza sits at the center of the historic city of St. Augustine and is an open-air park that was laid out in 1573 by the Spanish Royal Ordinances. The Plaza features a pavillion the is used for private, city events and live music. This area was used since the 1500s as a market where food as goods were traded. 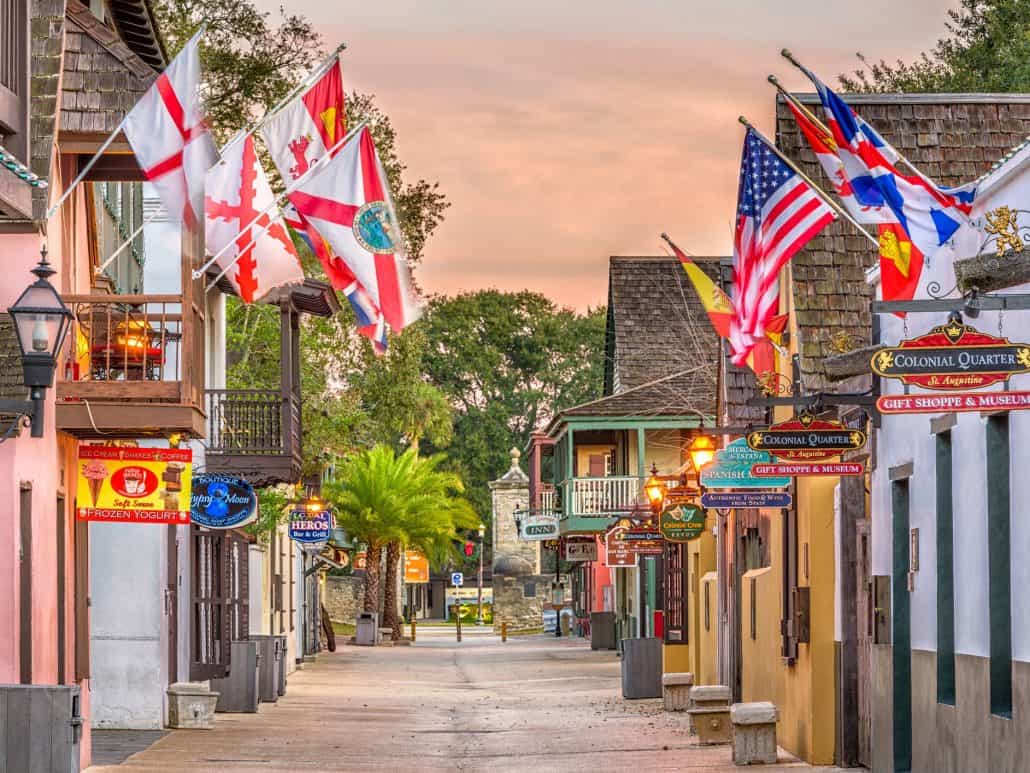 Located at the north end of St. George Street, these ancient columns or gates have stood for over 200 years. Built in 1808 as the first line of defense for the city, these ancient columns were built because St. Augustine was attacked by Carolinian Governor James Moore and his troops in 1702, which damaged much of the existing town. After this, the residents of the city began the construction of a fortification around the city. The northern protective border was known as the Cubo Line. It was mostly made of earthworks, but was fortified with palmetto logs, a moat, a cannon, and a wooden gate towards the road that we now know as San Marco Avenue.

This is one of the main streets in the city that is pedestrian only (no vehicles allowed). Starting at the Old City Gate from the north, you can walk St. George Street all the way to the Plaza de la Constitucion. St. George Street is a destination hotspot in the city which is home to retail shops, restaurants, bars and museums.