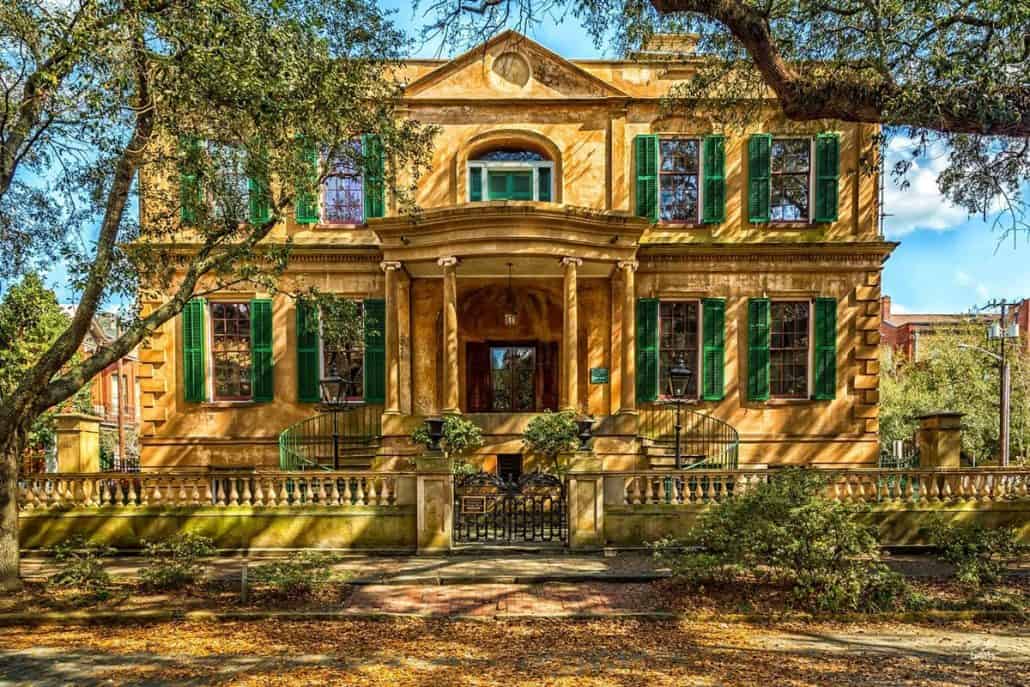 Built as a beautiful Regency style mansion in 1819, the Owens-Thomas House, along with its adjacent gardens, carriage house, and slave quarters, allows visitors to explore the complicated relationships between the most and least powerful people in the city of Savannah in the early 19th century.

History of the Richardson-Owens-Thomas House

In November 1816, work began on the new home of banker, shipping merchant, and slave trader Richard Richardson and his wife, Frances. The home was designed by English architect (and relative to Richardson by marriage) William Jay, but was constructed by builder John Retan and the team of free and enslaved men in his charge. The site also included a two-sided privy and a building located on the east end of the lot, which was divided into a carriage house and slave quarters.

The Richardsons moved into the home with their six children and nine enslaved men, women, and children in January 1819. Unfortunately for the Richardsons, the next three years saw steady decreases in their prosperity, including the financial Panic of 1819, a yellow fever epidemic, a fire that destroyed half the city, and the death of Frances and two of the children. By 1822, Richardson decided to sell the house and move to Louisiana, where he had family and business interests. He had been shipping enslaved people, mostly children, from Savannah to New Orleans for years.

By 1824, the Bank of the United States owned the house, which they leased to Mary Maxwell as a boarding house. The Marquis de Lafayette was a guest of Mrs. Maxwell when he visited Savannah in March 1825 as part of his whirlwind tour of the United States for the 50th anniversary of the American Revolution.

In 1830, George Welshman Owens, then mayor of Savannah, purchased the property at auction for $10,000. Owens, who was also a lawyer, planter, and politician, moved in with his wife, Sarah, and their six children in 1833. Over the years, Owens kept nine to 15 enslaved people on the property and held almost 400 men, women, and children in bondage on his plantations.

The last Owens descendant to live in the home was George Owens’ granddaughter, Margaret Gray Thomas. When Thomas passed away in 1951 with no direct heirs, she willed the house to the Telfair Academy of Arts and Sciences to be run as a house museum in honor of her grandfather, George Owens, and her father, Dr. James Gray Thomas. The site opened to the public in 1954.

The south half of this building originally housed horses and carriages on the first floor with a hay loft on the floor above. Beginning in;November 2018, the first level of this building will house our Orientation Gallery. Exhibits in this space help put the story of the site into the larger context of local, regional, and national history. The site of the original hay loft now houses The Loft, a workspace for Telfair’s historical interpreters to study primary documents, examine archaeological artifacts, and research our sites’ history.

The north half of the building contains the original slave quarters for the site. This two-story structure was composed of three rooms on each level. Nine to 15 enslaved people, about half of whom were children, lived and worked on the site at any given time between 1819 and the end of the Civil War. Once the war ended, the space became servants’ quarters, housing many of the same people.

Now these these wonderfully preserved spaces offer new interactive exhibits to help visitors understand the day-to-day lives of the enslaved people who lived and worked in the space, as well as the most unique architectural feature of the house, the indoor plumbing.

from 874 reviews
Erica B.
St Augustine TourPass
Bought All the Cities!

Purchase a gift card / store credit for any amount. Can choose instant delivery to recipient or can print

Enter any amount you wish

Save 32% Off of Retail Ticket Prices

Save 34% Off of Retail Ticket Prices

Save 27% Off of Retail Ticket Prices

Save 37% Off of Retail Ticket Prices

Save 33% Off of Retail Ticket Prices