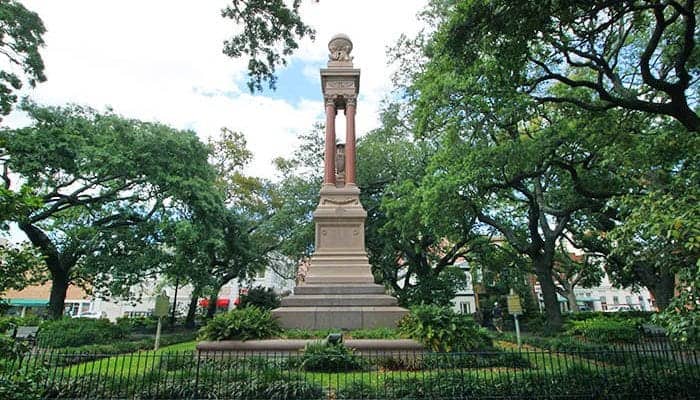 Savannah’s second square, Wright Square, was laid out in 1733. Originally named Percival Square, the square was later re-named Wright Square to honor the last Royal Governor of Georgia, Sir James Wright. Home to the city’s courthouse since Savannah’s earliest days, locals frequently refer to the area as “Court House Square.” In Oglethorpe’s day, Wright Square was the legal center of the Georgia colony, and a bustling hub of activity as the site for not only trials, but hangings, public auctions, and the reading of public announcements and decrees. In 1739, Wright Square gained the distinction of being the first of Savannah’s squares to be marked by a monument.

WRIGHT SQUARE GHOST – ALICE RILEY – Unlike many other reported ghost sightings, quite a few details are known about Wright Square’s resident haunt, the young Alice Riley. Ms. Riley was an indentured servant, cruelly mistreated by her master, William Wise. Much is known about the conditions of Ms. Riley’s servitude, including the fact that Mr. Wise required Alice and her husband to bathe him daily, and that he sexually assaulted the young woman. Desperate to be free, Alice and her husband drowned Mr. Wise in his bath and fled the city in March of 1734. Apprehended on the Isle of Hope, the couple was returned to Savannah for hanging. Alice’s husband was hung first, but when it was Alice’s turn she plead for mercy and for the life of her unborn child. It was discovered she was carrying Mr. Wise’s child and she languished in prison until the birth of her infant. In January of 1735, a crowd watched as Alice Riley was dragged onto the gallows, screaming for her newborn baby. She was quickly hanged, and her body was left on display for days. Sadly, her infant child died only 45 days later. Reports of Alice Riley’s ghost span hundreds of years, and it is said that the spirit most often appears to expectant mothers, or women with young children, searching for her baby. Interestingly, you will see little Spanish Moss growing in Wright Square, while it is found in abundance in other areas of the city. Locals offer up this oddity as evidence of Alice’s story. Native American lore tells us that Spanish Moss cannot grow where innocent blood has been spilt.

from 826 reviews
Erica B.
St Augustine TourPass
Bought All the Cities!