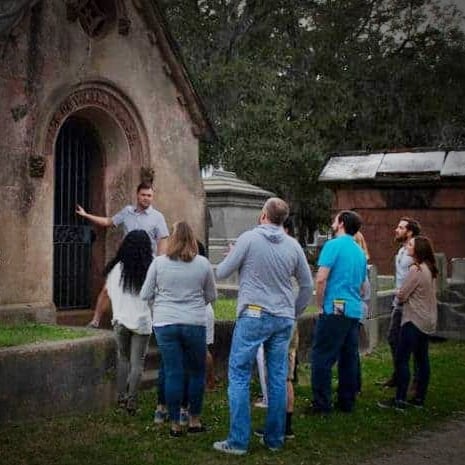 The Spirits of Magnolia Cemetery Tour gives you exclusive access to the most hauntingly beautiful Victorian burial grounds in Charleston.

Originally a 1790 era rice plantation, Magnolia Cemetery was founded in 1849 on the banks of the Cooper River in Downtown Charleston. Home to 35,000 permanent residents, including authors and poets, artists, Confederate generals and soldiers, prominent politicians, bootleggers, prostitutes, and socialites. Magnolia Cemetery served as a Confederate encampment to defend the city from the Union bombardment during the Civil War. Over 2,000 Confederate soldiers lay at rest in Magnolia, including the eight-man Hunley crew, eighty-four soldiers who fought in the battle at Gettysburg, and six confederate generals.

This nighttime tour is the first official walking tour of the historic site, previously off limits to commercial tour companies. The 90-minute walking tours promise the best of Magnolias history, mystery, and spirits. You will hear startling stories such as an unsolved murdered socialite, an outraged politician that ordered his butlers execution and scandalous tragedies that are never told in history books.

Do not forget your flash cameras! You never know what phantom images you can capture.

Ample parking is available at attraction.